The Cecil Hotel’s reputation as one of the most haunted places in Los Angeles has more to do with its terrifying history than it does anything paranormal. The hotel served as a temporary home for serial killers Richard Ramirez and Jack Unterweger. Elizabeth Short, the “Black Dahlia,” was reportedly last seen there before her murder. A season of American Horror Story was set there. And the Cecil was where the mysterious death of Elisa Lam took place in 2013. But for Amy Price, the Cecil was just the hotel she managed for a decade. And she doesn’t believe it deserves the reputation it has, either. “It’s not the hotel that’s created all the darkness. It’s the circumstances over time.”

The Cecil Hotel is now the subject of Joe Berlinger’s new Netflix documentary series Crime Scene: The Vanishing at The Cecil Hotel, and Price is speaking on the record for the first time about what she experienced while employed there for a decade before the hotel closed in 2017. She was in charge of the operation when the disappearance of Elisa Lam occurred in 2013, and was on hand for the discovery of the 21-year-old’s body and the media circus that followed. She was also the brains behind the rebrand of half the hotel floors, those that did not house long-term residents, to become the “Stay on Main” budget hostel.

For years, conspiracy theories and rumors of paranormal activity have swirled around the Cecil Hotel. But for the first time Price is setting the record straight about the infamous hotel and its place in history.

Esquire: Have you seen the documentary yet?

Amy: I have. I loved it. I absolutely loved it. I did the interview last year, so it’s been about a year since we filmed it, and so I was really anxious to see the outcome. But by the last episode, I was just absolutely thrilled that the real story was told.

Why did you agree to participate?

Well, actually a lot of it’s just luck. Over the years, many people had called for interviews and I’ve never done one. And when I got an email from Netflix, explaining that they had found me, I was actually relieved that they had found a real source. I mean, after all these years, and there’ve been so many mini-movies on it and all that, but no one from the hotel had ever participated. I was excited that somebody actually found a real source, and I just went for it, so on a whim, actually.

What do you mean by ‘a real source’?

Meaning that all the documentaries, like the ones before this on YouTube, and just all the talk about the case. I’ve seen so many articles and none of them are talking to anyone that worked at the hotel. They have their own ideas. So it was nice to actually be able to step forward and tell my story. 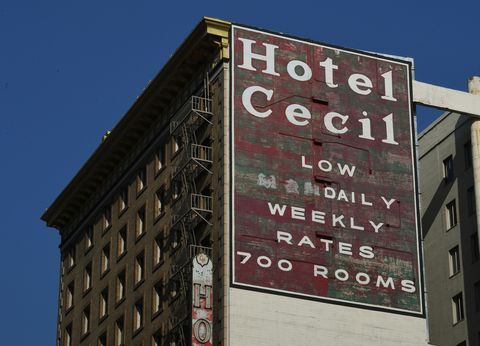 What do you think the public’s biggest misconception about the Cecil is?

Did the Cecil’s reputation ever deter you from taking your job in the first place, running it?

Never. I didn’t even research the hotel before I started working there. There wasn’t even an interview. In the beginning I was just helping a girlfriend’s husband out to do some work there and it turned into a 10-year career.

So you learned about all the history after you started?

So the hotel is frequently thought to be cursed or haunted, but the documentary, it paints a picture of a place that has suffered from the failings of the criminal justice system, and inequality, and poverty in Los Angeles. What do you make of those haunted labels?

What was your biggest challenge in running the hotel?

From the time I started there, it was really just trying to figure out what to do with it, because there were so many challenges, meaning half the hotel is designated for housing, the other half is a hotel. It was really hard to figure out how we could actually run a business with the circumstances that we had.

Did you come to know any of the long-term residents while you worked there?

Did you ever experience anything scary yourself?

No. No. Not aside from dealing with the things that were happening on the job that are pretty public, but no, nothing on the side, no.

Do you remember interacting with Elisa Lam?

Do you know who moved her to a new room? 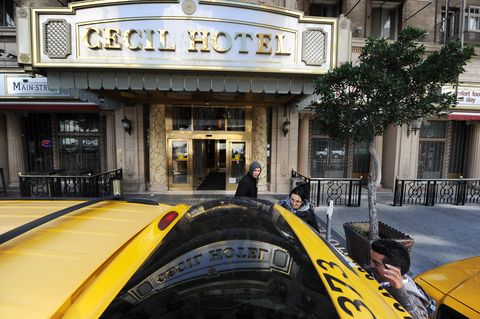 A taxi driver (R) waits as married British tourists Mike and Sabina Baugh, both 27, put their bags in a taxi as they leave the Cecil Hotel to relocate to a different hotel, in Los Angeles California February 20, 2013. The body of 21-year-old Canadian tourist Elisa Lam was found in a water tank on the roof of the hotel three weeks after she went missing, police said. The corpse was found February 19 after hotel guests complained of low water pressure.

So in the documentary, web sleuths comment that Elisa’s family should have been contacted when she made a scene in the lobby or had to be moved rooms. What do you think of that from a managerial perspective? Is that even conceivable?

I think it’s ridiculous. I mean, we weren’t running a hospital. We’re running a hotel. I don’t think it’s the responsibility of somebody that’s running a business to confirm that somebody’s playing with a full deck of cards.

Did you have your own hunch about the case while the investigation was ongoing?

Well, yes. I had my own hunch but I certainly didn’t think the outcome would be the outcome. I thought maybe she had gotten mixed up with the wrong group of people or something while she was visiting L.A. by herself. I mean, that’s really what I presumed, but I really didn’t think much more aside from that.

I know that the case has been closed for a long time, but I feel this documentary is going to, for a lot of people on the internet, really put an end to it. Do you agree?

Yes, and I couldn’t be more relieved.

Do you feel this case still follows you in life, or you put it behind you?

I mean, it follows me in life in conversation and meetings. When I’m meeting people for the first time or when I’m talking about where I used to work, and then if they’ve ever heard of it, I will reference, “Oh, have you ever heard of this?” I mean, that’s basically how it affects me.

What was the filming of the documentary and working with the team like?

Oh, it was fantastic. I couldn’t have worked with a group that was more professional, just every step of the way, top-notch. And I would have never done this interview if they weren’t so professional, ever. There was no reason for me to do the interview unless I really wanted to do it. And working with them, they made it really easy, and I believe that they would tell the real story and that’s the reason why I did it.

What is your greatest takeaway from your time at the helm of the Cecil?

That’s a deep question. I guess I want to go with something like, “If life gives you lemons, make lemonade,” and that’s what we did as a team there. I wasn’t alone, working there. I worked with a whole team of people and we went through a lot, and with all that, there’s a bond that would never be broken and we did it.

Lauren Kranc Lauren Kranc is an editorial assistant at Esquire, where she covers pop culture and television, with entirely too narrow of an expertise on Netflix dating shows.

THIS book is described on the cover as “Everyday investigations into poltergeists, ghosts and other supernatural phenomena by an Anglican priest”. Jason Bray is...

During the 1990s, there was a brief moment when directors everywhere collectively decided that they were going to make Westerns popular again. From Tombstone...

New England is laden with haunted tales and supposedly haunted places — from private residences, to city halls, to buildings people refuse to occupy as a result of...