While you certainly don’t need to wait until All Hallow’s Eve to give yourself a good fright—after all, true crime shows are popular year-round—you can’t deny that the fall is the perfect time to gather round a campfire (or a woodsy-scented candle) and share a genuinely scary ghost story with your friends. From tales of haunted hotels that you can still visit and houses crawling with specters, and supernatural encounters straight out of a Halloween movie, these scary ghost stories, which are actually said to be true, will kill (pun intended) at your autumn bash, your kids’ sleepover or an adults-only wine or, err, candy corn cocktail night.

One of the most infamous and well-known ghost stories started on November 13, 1974, when Ronald J. DeFeo Jr. murdered his entire family in Amityville, New York. However, it wasn’t the six person homicide that put the sleepy little Long Island town on the map: It was the home’s paranormal activity, which began 13 months later when it was acquired by the Lutz family. Of course, details of the haunting (like most hauntings) are unconfirmed, but the Lutz’s claimed that during their 28 day stay they witnessed several strange and unexplainable events, i.e. doors flew off their hinges, slime seeped out of walls, and there were ghosts. George Lutz used to wake up at 3:15 every morning, the exact time the DeFeo murders were carried out. Since reports of the haunting first surfaced, the Amityville home has been the backdrop for several books, documentaries, and films. 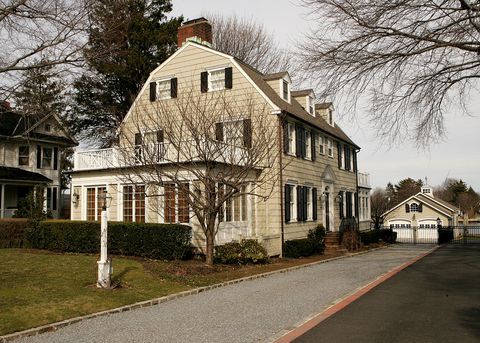 You’ve probably seen—or, at the very least, heard about—The Conjuring. The 2013 film featuring Vera Farmiga, Patrick Wilson, and Ron Livingston was very well received, but did you know the supernatural thriller was based on a true story? Yes, the Perron family really existed and lived in a “haunted” home. So what happened? According to the Perrons, their Rhode Island residence was the site of several strange occurrences. Things moved at random, there were unexplained noises, and—yes— ghosts. The Perrons even experienced the occasional “possession.” And while their home was not the site of a mass murder, many children died under mysterious or suspicious circumstances, and their deaths have been tied (albeit loosely) to legendary satanist Bathsheba Sherman. 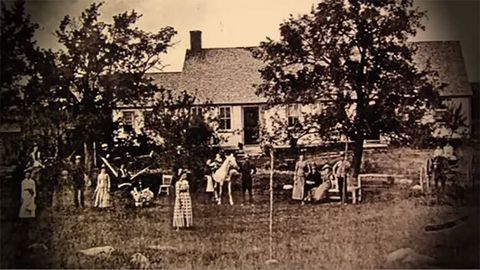 The Crying Lady in The Dakota

When The Dakota was built, it was something of a modern marvel. According to Curbed New York, an 1885 Real Estate Record and Builder’s Guide regarded it as “one of the noblest apartment houses of the world.” And since its opening, it has housed many famous residents, including Peter Tchaikovsky, Lauren Bacall, Rosemary Clooney, Connie Chung, and Maury Povich. But The Dakota made a new name for itself after John Lennon and Yoko Ono moved into the building in 1973. Why? Because Lennon claimed he saw a “crying lady ghost” roaming the halls, and after Lennon died—directly in front of The Dakota—Ono said she witnessed Lennon’s ghost sitting at his piano. 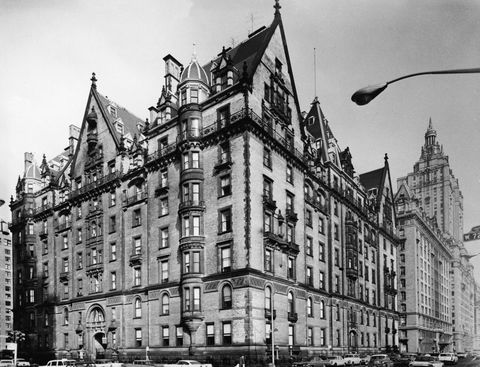 While this one is not a “ghost” story, the tale of the Jersey Devil has withstood the test of time—and for good reason. Stories of the winged beast are truly terrifying. But who or what is the Jersey Devil? According to Weird NJ, the infamous creature haunting the Pine Barrens is the child of Mother Leeds, a Pines resident who conceived her thirteenth child in 1735. At the time, Leeds had no idea how she could care for (let alone afford) another kid and so, in exasperation, she raised her hands to the heavens and proclaimed “Let this one be a devil!” Leeds got her wish. Moments after birth, her healthy baby boy grew horns and claws and bat-like wings. Legend has it the “devil” then killed his mother before attacking onlookers. 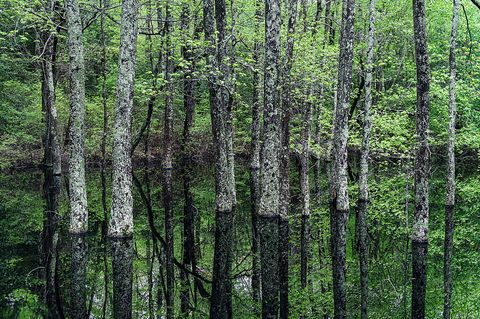 Phantom Steamboat on the Tombigbee River

In February 1858, a steamboat named Eliza Battle set out on a cruise down Alabama’s Tombigbee River. Onboard were 60 passengers and more than 1200 bales of cotton. But when the cotton caught fire on March 1, guests and crew were overcome by smoke and flames. 33 perished on (or in) the Tombigbee. It is said those ill-fated passengers haunt the river to this very day, and on brisk nights, people have claimed to see the Eliza Battle in the misty waters. 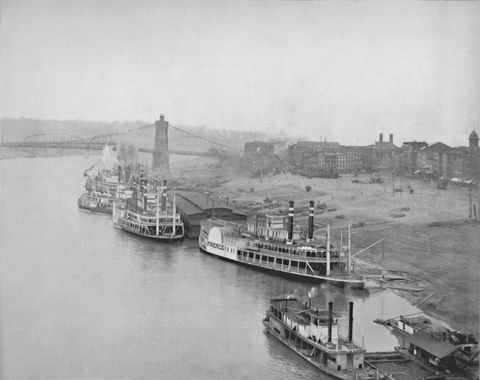 Much like The Conjuring, the Bell witch is the subject of two films, An American Haunting and The Blair Witch Project, as well as several podcasts, and books. But where did the witch come from? Rumor has it the Bell witch first appeared in the early 1800s, when the Bell family—for whom the witch was named—moved to Tennessee. After settling into their new home, the Bells began hearing strange noises, including dogs barking, chains rattling, and a woman whispering, and the latter became known as the Bell witch. Of course, no one knows her true identity, but legend has it she’s the ghost of a former neighbor, Kate Batts. It is also believed the witch played a role in the untimely loss of John Bell, who died from poisoning.

The Ghost of Henry Dixon

Tunnelton may be a small, unincorporated town in rural Indiana, but it is big in the ghost hunting community. Why? Because Tunnelton is home to the Tunnelton Tunnel—a.k.a. The Big Tunnel—where it is said numerous ghosts still linger, both on and beneath the grounds. However, the most famous tenant is Henry Dixon, a night watchman whose body was found just inside the tunnel in 1908. Dixon’s murder was never solved, and many have reported seeing the watchman on patrol—lantern in hand. Locals have also been “chased” by Dixon.

The Legend of the Hamburger Man

While the origins of Hamburger Man are unclear, the reason for his moniker is obvious. Urban legend says the half man, half monster kidnaps his victims, drags them deep into the woods of Sand Hills State Park in Hutchinson, Kansas, and— once there—grinds his victims into hamburger meat.

In the summer of 1863, hundreds of thousands of soldiers descended on Gettysburg, Pennsylvania, and many lost their life. According to How Stuff Works, more than 50,000 infantry men were left dead, wounded, or missing, and rumor has it some of these soldiers still haunt the battlefields, particularly Devil’s Den: a rocky enclave where 1,800 died. One woman claims she felt a hand grab her ankle at the historic site, and several others have seen ghosts “appear”, both in person and in photographs. 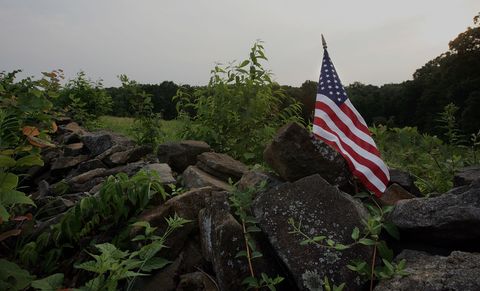 It is said numerous spirits haunt the Myrtles Plantation in St. Francisville, Louisiana; however, the most well-known ghost is Chloe who, according to the plantation’s official website, is the former slave (and love interest) of plantation owner Clark Woodruff. Their affair ended abruptly. Woodruff caught her eavesdropping on him, and as punishment, cut off her ear, but Chloe allegedly exacted her revenge. She poisoned the rest of his family. Unfortunately, Chloe’s peers did not defend her actions. The other slaves knew what she had done and hanged her. It is believed Chloe resides on the property to this very day.

More than a century later, one brutal night still haunts the small town of Villisca, Iowa. In the early hours of the morning of June 10, 1912, Josiah and Sarah Moore, their four children, and family friends Lena and Ina Stillinger, were bludgeoned to death in their sleep at the Moore’s home. As the investigation unfolded it was found that the doors of the house were locked, all but two windows were covered, and the murder weapon—an axe—was left at the scene. The killings remain unsolved.

In 1994, the house’s new owners restored the property to a near-exact replica of how it looked at the time of the murders. Paranormal investigators have named the Villisca Axe Murder House as one of the most haunted in the country, with a ghost hunter even stabbing himself after a night spent in the home. The house is open for day tours and stays for $428 a night, with many occupants reporting they’ve had some sort of supernatural encounter, like hearing voices, while sleeping overnight.

The Ghosts of Hinton Ampner

This haunted English mansion is what supposedly inspired Henry James to write his renowned horror novella, The Turn of the Screw, which in turn was reworked for television for Netflix’s The Haunting of Bly Manor. As the story goes, in January 1765, the Ricketts family moved into the manor after renting it from a woman named Lady Stawell. Almost immediately the inhabitants and the staff—particularly Mrs. Ricketts—reported multiple instances of observing ghostly beings and hearing disturbing sounds. Sightings included a swiftly walking tall woman in a silk dress and a cloaked figure. While living at the mansion, Mrs. Ricketts heard gunshots, slamming doors, footsteps, shrieks, and moans.

“They began before I went to bed, and… were heard till after broad day in the morning. A shrill female voice would begin, and then two others with… manlike tone seemed to join in the discourse… though this conversation sounded as if close to me, I never could distinguish words,” she wrote at the time, according to the National Trust.

After seven years, the Ricketts moved out once the home was deemed unfit for occupation. When it was demolished in 1793, workers found a box on the grounds that contained a small skull. It was thought the remains were from the child of Lord Stawell and his sister-in-law, Honoria, who were decreed the ghosts of Hinton Ampner. The property has been reconstructed multiple times over the decades to reflect the era, and is now under the care of the U.K.’s National Trust.

The Legend of Huggin’ Molly has been passed down for generations in the small town of Abbleville, Alabama. It’s said that the ghost of Molly, a cloaked 7 foot tall woman, roams the streets of Abbleville at night. If children cross her while out and about, she’ll chase them, envelope them in an unwelcome embrace, and scream in their ears. Legends of her origin vary from versions that she say she was a woman who tragically lost her baby, to a local professor who was attempting to keep kids from venturing out at night. She’s become so ingrained in the folklore of the town, that there is a beloved local cafe named after her.

“Anybody who grew up in Abbeville grew up knowing the legend of Huggin’ Molly,” a native of the town, Jimmy Rane, told AL.com. “If your mother or dad didn’t want you to be out after dark, they’d tell you Huggin’ Molly would get you. And you believed it, too.”

GHOSTLANDAn American History in Haunted PlacesBy Colin Dickey320 pp. Viking. $27.Whether or not ghosts are real is beside the point, Colin Dickey tells us...

A pair of potential hauntings, a resurgence in dowsing, and an Australian man who fled a coronavirus quarantine using a rope made of bed...

So should I have disclosed that ghost? | Columnists | dothaneagle.com – Dothan Eagle

Most everyone in the tiny village of Nyack had known for years that the 5,000 square foot home owned by Helen and George Ackley...

On Halloween, people shed reality for a day and mark the holiday with costumes, decorations and parties. Creepy legends and characters have evolved based...
Load more