When Darwin and Martha Linn bought the three-bedroom house in Villisca, Iowa, in 1994, they planned to turn it into a historic museum. Almost a century prior, the original owners, their four kids, and two young guests had been brutally murdered in the house in their sleep—in a case that rattled the small town, and then went cold. The Linns figured that, with some good marketing, folks would pay to hear all about it.

Soon after the sale, though, they got an influx of requests from some unexpected inquirers: paranormal investigators who wished to visit the house to commune with the ghosts of the victims. The couple hadn’t even heard of this profession, but they seized upon the demand. Because now they knew that the little white Villisca farmhouse—possibly the most familiar-looking house in the most familiar-looking town in the country—didn’t just have a creepy history. It was haunted.

The Lizzie Borden House in Fall River, Massachusetts, site of a gruesome crime turned nursery rhyme, was purchased earlier this year (for nearly $2 million) by an entrepreneur who plans to turn it into a museum-oriented bed and breakfast.

Martha got to work, restoring the house to look exactly as it did in 1912, at the time of the murders. The Villisca Axe Murder House has been open for business ever since. For $428, groups of six or fewer can book an “overnight” to sleep where the original owners were killed (in rooms so spartan guests are asked to bring sleeping bags), while the less courageous can book daytime tours for $10 a person.

As strange as it may seem, the practice of transforming former homes with a tragic past into hotels is a common one. “I’ve seen people who buy these places and just leave them the way they are because they know people will come through to do a tour,” says paranormal investigator, reality TV host, and comedian Marcus Harvey. “I mean, we’re the ones living right now. It’s not like we’re having to split the profits with the ghosts.”

Everyone knew what happened in the little white farmhouse on 2nd Street.

Hotels do this all the time. Countless—and otherwise stately—accommodations have taken their sordid reputations (earned or otherwise) and repurposed them into marketing schemes. Take the Stanley Hotel in Estes Park, Colorado, which became infamous as the inspiration for Stephen King’s 1977 horror novel The Shining after King and his wife stayed in it and got spooked. Author George Beahm describes King roaming the halls, going to the hotel bar, and pulling back the curtain on the tub, thinking What if somebody died here?

Stanley Kubrick’s 1980 film adaptation really put the hotel on the map (even though it wasn’t actually filmed there), so after years of declining bookings, management decided to leverage the newfound fame. Now, guests can stay in one of the Stanley’s “Spirited” rooms, including the famous Stephen King suite, 217, the Ghost Hunters’ favorite room, 401, and rooms 407 and 428, all of which the hotel’s website characterizes as having “high paranormal activity.” (No information is provided as to why the latter two have haunted reputations.)

Visitors to the Mount, Edith Wharton’s onetime summer house, have reported hearing footsteps in empty rooms and “tingling taps on the shoulders.”

It’s a relatively cheap thrill, visiting a haunted house, whether as a hotel guest or museum visitor. You arrive, you commune (or attempt to) with the departed, and then you get the hell out of there afterward. As a bonus, you’ll also soak up some local history and experience a bygone architectural style firsthand.

FRIGHT AT THE MUSEUM

It might seem odd to turn a crime scene into a tourist attraction. But there’s a whole industry built around it called dark tourism. This isn’t a new concept by any means—consider, for example, The Colleseum in Rome, or even war memorials and museums. These sites can be seen as classrooms, in a sense. “I’m glad people are reminded of the horrors of the past,” says Tok Thompson, Ph.D., a folklorist and professor of anthropology at the University of Southern California. Once people learn about them, they can make a “commitment to doing better to the future. [They] can be a real ethical force for good in helping people deal with the ghost of the past and deal with what they’re haunted by.”

There are also some museums that dabble in dark tourism without letting it define the entire experience: The Mount, a sprawling home on 50 private acres that Edith Wharton, famed author of gilded age novels and even some ghost stories, designed and built for herself in Lenox, Massachusetts, in 1902, is now a sophisticated museum and wedding venue. Seasonal ghost tours are hosted on the grounds, for $28 per adult and $12 per youth, to drive up Halloween foot traffic.

A few hours east, Salem, Massachusetts, has capitalized on its haunted history of criminalizing witchcraft—code for anything that fell outside the puritanical pale of normality (think Hocus Pocus, Practical Magic, and The Witch). According to a study from the 2010s, the Salem Witch Museum and the House of Seven Gables together entertain over 520,000 visitors annually (over 40 percent of whom come in October), bringing in up to $22 million in 2005, and has surely only grown since.

Still, some dark tourism participants do so unwillingly. The site of a 1981 shooting, the Mercer-Williams House in Savannah, Georgia, is a crucial stop on the city’s many ghost tours, and the residence that inspired John Berendt’s best-selling 1994 novel, Midnight in the Garden of Good and Evil. But the current owner focuses museum tours on the fabulous antiques and architectural details rather than any hauntings.

Far less intimate than overnight stays and less official than museums, ghost tours are more like drive-by interactions. They may start within a cemetery, and then the group will mosey around a neighborhood hearing about everything from the history of important figures in the region as well as local tragedies and the lore that surrounds them. But even ghost tours can run into some pitfalls as far as what can and cannot be said, and how history is represented. In Savannah, Georgia, guides had to complete a rigorous training course to obtain licenses until 2019 when a court ruled the restrictions unconstitutional. On one hand, the restrictions aimed to prevent the spread of misinformation, but ultimately, they also demonstrated an attempt by the courts to control the narrative. 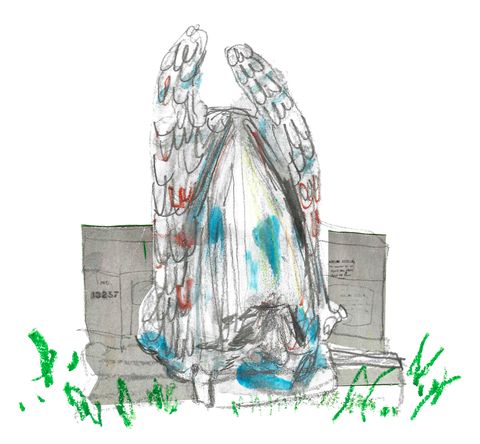 A former tour guide there, Elena Gromely, wrote for Vice about how some operations packaged these histories to give tourists a fun night out—ultimately turning the atrocities of the Trans Atlantic Slave Trade, gender violence, and the removal of indigenous Americans into more palatable tales. In reality, these omit the most brutal parts of history and paint the legends as personal matters rather than ones driven by systemic issues. So when ghost tour guides are able to honor a city’s history in a more informed, honest, and dynamic way—instead of regurgitating an “official” history—they are at their finest.

The oral tradition of ghost stories allows for flexibility—it’s harder to control what is said verbally than what is published in a textbook—proving to be a resilient cultural tool that represents the perspective of the people who otherwise might not have such a platform in textbooks and other mainstream sources. 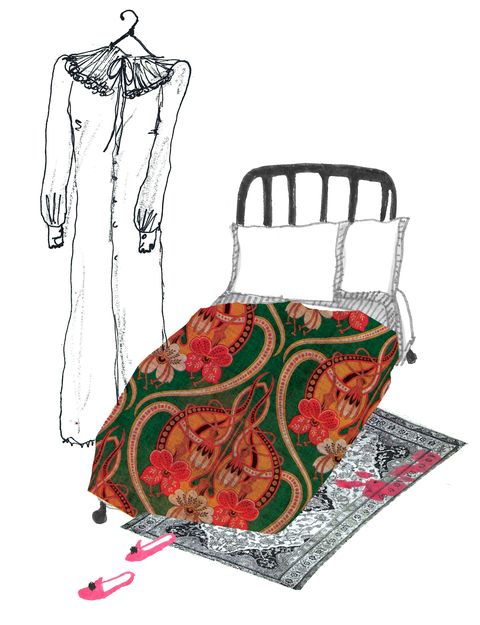 As Professor Thompson explains, the best ghost tour guide “tell the unofficial histories” and they keep the tradition of professional storytelling as entertainment alive, all for the average small fee of about $20 to $40 per person. Considering there’s no up-front real estate investment and only a tour guide to hire, profits can be significant. Most cities host at least one reputable ghost tour company, from New Orleans to San Francisco, New York City, and beyond.

The Crain family at their new home in Netflix’s The Haunting of Hill House.

Part of the allure of these attractions is that their backstories are straight-up entertaining. We’re been gathering around campfires to tell ghostly tales for centuries. And sometimes they’re purely fictional… Picture the classic haunted Victorian house on a hillside: There’s a reason it’s a cliché. “These were intended to be the grand mansions for the aristocracy, and then the aristocracy crumbled,” explains Professor Thompson. “You still see this in Europe: a grand old family manor that the family really can’t afford to keep in good shape.” Some of the best (and most profitable) ghost stories take place in houses just like these.

The bible of them all is The Haunting of Hill House, Shirley Jackson’s 1959 gothic novel that follows a peculiar group of characters who convene at a haunted mansion to assist a parapsychologist investigating it. Besides earning Jackson a finalist nod for the National Book Award, the story has inspired countless film adaptations. The Haunting made more than $177 million at the box office in 1999, and was parodied in Scary Movie 2 in 2001, which earned $141.2 million. Jackson’s story also inspired provided source material for the first season of Netflix’s series of the same name, resulting in praise from Stephen King and Quentin Tarantino alike—and renewal for a second season.

A house that fails to protect its family turns the American dream into a nightmare.

In America, owning a house is a golden ticket to community, belonging, and power. The house that fails to protect its inhabitants inverts that American dream into a nightmare. Production companies know that certain viewers will forever have a morbid fascination with this narrative. So what, exactly, has us so hung up on haunted houses?

Ghost stories about homes get personal. They ask us to confront our deepest fears—about history, family issues, death, etc.—and start working through them. That’s why we keep streaming, keep booking rooms at spooky mansions, keep looking under the bed before we get in it. “What are we haunted by? We’re haunted by our moral lapses,” says Professor Thompson. “If we listen to ghost stories, we can be better informed about how to be better people.”

Subscribe to our haunted house podcast Dark House on Apple Podcasts, Spotify, or anywhere you listen.

Hadley Mendelsohn Senior Editor Hadley Mendelsohn is House Beautiful’s senior editor, and when she’s not busy obsessing over all things decor-related, you can find her scouring vintage stores, reading, or stumbling about because she probably lost her glasses again.

If visiting haunted locations is up your alley, get ready to lengthen (and strengthen!) your paranormal bucket list. But even if you simply enjoy...

A 21-year-old woman says she wads forced to call in a psychic medium to cleanse her haunted home after an "angry and aggressive" ghost...
Load more